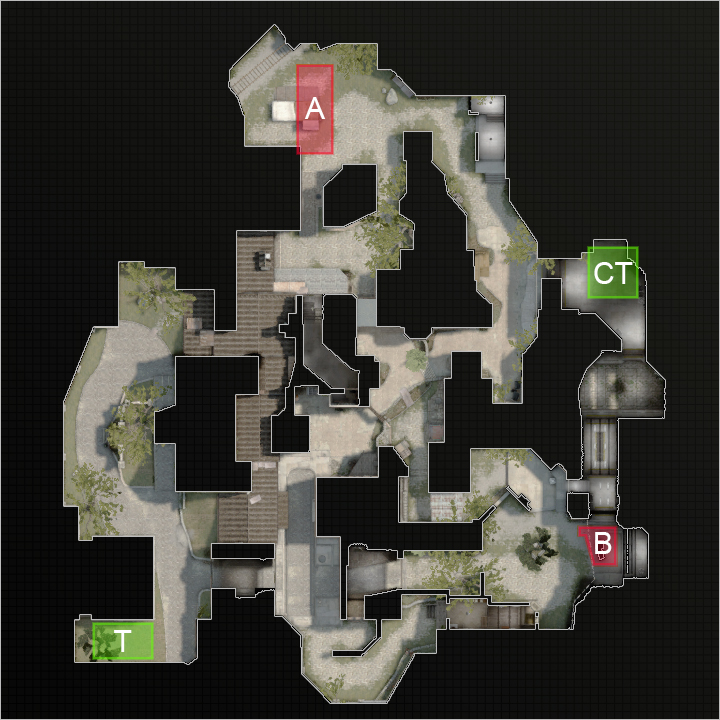 De_chimney is a map that I’ve worked on for a long time just to have something to tinker with at home. It’s primarily designed for competitive play in the bomb defusal gamemode. The map features mostly mid to long range combat and is set in a small town setting very loosely based on Karlshamn, Sweden. The layout has gone through many changes and iterations and looks very different from the first playable version. Though one thing that has always existed in every version of the map is some kind of door in middle that only opens towards the T side that can’t be closed again until the end of a round. The idea that players can permanently and deliberately change a part of the map In Counter Strike has long fascinated me. The official maps have aspects of this like with breakable doors , vent grids or windows but I think there is room, even in the most competitive maps, to push this concept further. The doors in the middle of this map was my way to push it a just little further. The fact that it only opens from the CT side and that they are given a safe way to reach it at the start of a round initially gives the CT players the choice if they want to give the other team one more way to enter the CT side of the map. One reason to open it could be if CT wants to do a fast mid push catching the other team off guard, maybe on an eco round when only having pistols. Another reason could be to open up middle to give a sniper more sight.

Terrorists are given a way to circumvent the door by doing a few jumps just to the side but this approach is designed to leave you a lot more exposed and is also louder because of the player having to drop off from a small height. My initial thought was to give the T side a way to jump on top of each other to get players past the door so that it then can be opened up for the rest of the teammates, almost giving it sort of a heist feeling. I chose the current implementation because casual gamemodes doesn’t support players standing on top of each other and I still believe that it gets a similar resault.

One of my goals with the map was to work a lot with verticality but at the same time try to not promote situations where you are fighting someone straight under or above you as these kinds on encounters tend to not feel very great.

Running from T spawn across rooftops ending up outside the A site.

Running from CT spawn towards middle and scopin in at the closest point of contact with players from the T side..

Running from T spawn towards middle and scopin in at the closest point of contact with playersform the CT side.

Entering B site from the first entrance from the T side.

Entering B site from the second entrance from the T side.

Entering A site from the first entrance from the T side.

Entering A site from the second entrance from the T side.